Polaris introduced the RZR XP Turbo in 2016, and it had some teething problems that the company was diligent in addressing. For 2017 the Turbo saw big improvements in cooling, braking and air intake for both the engine and the CVT case. Here it is near the end of 2018, and the RZR XP Turbo Fox Edition has lost some of the luster after being top of the RZR line in 2017. It has since been eclipsed in the minds of many by the Dynamix or the RZR Turbo S.

Even though there are Polaris suspension packages that are more technologically advanced, no Polaris model has more power than the Fox Edition’s 168 ponies. Add the fact that both the Dynamix and especially the Turbo S are heavier, and the Fox Edition is looking pretty good.

Dirt Wheels test pilot Dillon Ryan was searching for a good deal, and he located a two-seater Fox Edition. He was able to work a far better price on the Fox Edition than on a Dynamix or Turbo S.

Likewise, dealers weren’t budging on four-seater prices. Ryan wanted the Fox shocks, but wants to pick and choose his other suspension parts. Going with a Dynamix makes that a problem modifying the computerized shocks for the long-travel arms. The S is already wide with long travel, but that wasn’t the way he wanted to go. With both models, the Dynamix computer interferes with stereo installations. He broke in the belt, then turned his brand-new car over to us to test.

While our Turbo S has great suspension, our two-seat Dynamix never accomplished a supple ride. Our Fox Edition cars have been excellently suspended with plush and supple action for technical trails but with all the damping you need for quick driving. Plus, the Matte Sunset Red looks great.

Powerful CVT-driven machines put a lot of load on the CVT belt. But, the Turbo Polaris has a strong belt, and if it is broken in properly, it will offer good life. Polaris developed a belt cover tightly molded around the CVT in 2017, and the 2018 Fox Edition keeps the same cover. Polaris has a new plan with the Turbo S, but that is the only 2018 machine that gets it.

The engine air intake vents are twice as tall as in 2016, and they are two-sided, so there is vastly more intake area. Happily, we had no belt issues at all despite the heavy loads and the unseasonably high temperatures.

Polaris opted for stronger transfer cases and axles in 2017 to ensure reliability, and there was no change for 2018 on this model. We drove almost exclusively in AWD, and we didn’t have any problems at all with the drivetrain. For suspension, Polaris stayed with proven A-arm front suspension and trailing-arm rear suspension with stronger and lighter tubular radius rods. Fox Podium internal bypass shocks are used on all four wheels. Internal bypass shocks use bypass holes in the shock body’s inner chamber where the shock piston travels.

By using this design, the shocks have damping that is both speed- and position-sensitive. With 18 inches of rear travel and 16 inches in the front, Polaris has done an amazing job developing suspension that can handle sand whoops at speed as well as rock crawling in low range.

Finally, with added power and speed comes the need for quality brakes. We can say that the brakes are vastly powerful, and it didn’t matter the terrain we were dealing with. Our test loops have some long and tortuous descents, but we didn’t feel they punished the brakes much. We have driven with tires as large as 32 inches with these brakes, and they still perform well.

Our test was conducted primarily on hard dirt and rock but with occasional sand thrown in. It wasn’t dune sand, but sand wash and riverbed sand with gravel. We started with a near-new car with only the minimum break-in miles on it. As the miles piled up, the brakes bedded and grew stronger and the suspension became smoother and more responsive to sharp impacts.

The RZR line is generally comfortable and nimble, especially since the Turbo models have a quicker steering rack that require less steering wheel movement for lock-to-lock steering. We like the seats, and forward visibility is best in the class. Polaris has a rock crawler edition that has four-point retractable seat belts, and those make more sense for the Fox Edition than simple shoulder belts for a machine this potent and capable off-road.

The dash has only basic instrumentation that used to feel like plenty. In the time of the Ride Command and Dynamix models with a built-in touchscreen and GPS, the Fox Edition feels a little sparse. The seats are adjustable, but even with the seat all the way back, legroom for the driver’s left foot and the passenger’s right foot is a bit limited. Shifting can be a little crunchy, but is far better if you make sure that you don’t park on a slope if you can avoid it.

All of the Polaris Turbo models have some excellent strengths. It has extremely satisfying power delivery. For the first half of the rpm range the boosted twin cylinder has a great sound and accelerates with great torque feeling and energy.

It works equally well on technical, slow trails and wide-open dunes. Spin the engine higher into the top half of the rpm range and the rush can be a bit much for technical trails but more than welcome in the open and in the dunes.

Fuel economy takes a hit with the intercooled turbo. For fast running, we saw the fuel light at about 70 miles. That means that the Turbo is lucky to get better mileage than the V-10 that we used to tow it out to go riding.

When you are making quick transitions from dune to dune or trail turn to turn, the steering remains light but secure, and we could even make sharp turns without the need to reposition our hands. The handling is nimble in tight-going, and the suspension has a refined setting that allows slow-speed comfort while providing suspension that eats the rough. We found that rough and choppy rock sections can be hammered with speeds that are truly impressive.

Some may feel that this RZR XP Turbo Fox Edition is no longer King of the UTV hill, but it remains an amazing performer. Climbing into it from our Turbo S, the Fox Edition felt planted, fast and ultra-nimble. There isn’t a UTV engine that can touch this one at small throttle openings, and few that can intimidate it at wide-open throttle.

We are also impressed with how quiet the exhaust note is. Nothing about the XP Turbo sounds mean until you ride in it. Then, with the ground rushing by, it feels plenty mean and dedicated to devouring off-road terrain. Polaris believes in the product with a two-year warranty. As an all-around weapon that can do it all, the Polaris RZR is hard to beat. Getting a great price because most of the public is dazzled by electronic dash displays can’t be beat. 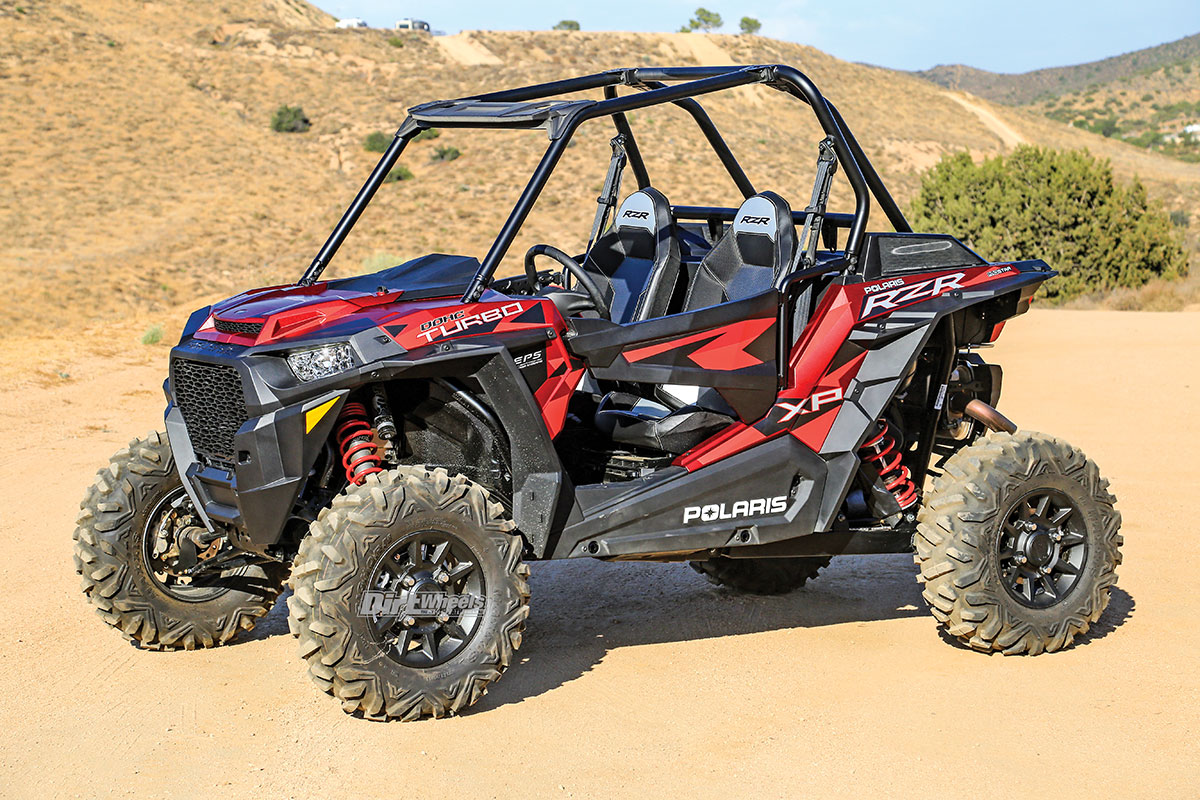